Why I use Trillian

Inspired by @AlanAndrews and @FalnFenix saying that they didn’t like Trillian, I was inspired to write up a bit about why I do like it :)

To be fair to both of them, prior to Trillian Astra (Version 4) it was really rather sub-par past about 2005-6, and Trillian Astra took forever to come out. I know, I was one of the closed-beta testers, and for at least 3 years people would ask me about the chat program I was using and I would have to tell them “you can’t have it.” Finally, they released Astra (Trillian 4), and relatively rapidly followed it up with v5.

Version 5 has one of the “killer apps” of IM, something that I didn’t know I couldn’t live without until I had it – what they call “continuous client.” Seamless integration across multiple client sessions or multiple host devices; with associated chat history sync &c. Yes, this does mean their servers can conceivably sniff your traffic – the options can be turned off. OTOH, it means you can keep chat history without storing it locally, which is a nice feature if you don’t fully control the machine (such as a work-owned machine. Check your IT policies concerning third-party programs and web services before using such).

Now, since Alan mentioned he used Adium, I’m going to deduce he’s a Macophile :) I don’t have any direct experience with either the OSX or iOS versions, but if they are anything like the Windows and Android versions, they’re pretty good.

Check it out – the basic version is free (ad-supported) and has all the features but cloud storage of chat history.

Posted by Ian Argent at 8:46 PM No comments:

Don’t knock it. Upon hearing this news all I could think of was this xkcd strip.

Here’s to the little robot that could.

Email ThisBlogThis!Share to TwitterShare to FacebookShare to Pinterest
Labels: Other People, Other Places, Space, Taps

Something about this article just bugs me.  It just seems to be a smug restatement of sexual stereotypes "reinforced" by dubious statistics.

Email ThisBlogThis!Share to TwitterShare to FacebookShare to Pinterest
Labels: Misc

Postcards blog posts about Mark Zuckerberg's (the Facebook Wunderkind) latest personal challenge: eating only that which he has killed. It helps to be rich, doing it the way he is, as well as living in CA, though it's not impossible to do elsewhere, on a more reasonale lifestyle. It's not something I am likely to do myself totally anytime soon, but I have killed my own dinner (chicken) before, and if I ever took up hunting, I would absolutely eat what I hunted.
Meat comes wrapped in plastic, laid on styrofoam for me these days, but that hasn't always been the case. I enjoy the convenience, but remember that someone had to do the work to put it there.

Posted by Ian Argent at 2:10 PM No comments:

Email ThisBlogThis!Share to TwitterShare to FacebookShare to Pinterest
Labels: Me, Other People

Mueller gets his gun

Morristown judge allows kidnapped Sussex County merchant to carry a handgun | NJ.com
So the powers that be in New Jersey have finally deigned to allowMr.Mueller the"privilege" of effective self-defense outside the home. After approval from the State Police, the couny prosecutor, two denials by judges, and a federal case. Not to mention several months of time, and however much money and hassle the two lawsuits took and are still taking.
And after all of this, he will have to apply to renew in a year or two, through the same process, still requiring "justifiable need."

Hi to all of you coming over from No Lawyer, Only Guns and Money. Stick around for more articles about the silliness of NJ guns laws.

Posted by Ian Argent at 6:34 PM No comments:

But I now have a halfway decent way to blog from Android. See, the Asus Transformer comes with a copy of Splashpad built into the cloud services program. Which I can use to remote to my desktop machine and write a post in Windows Live Writer. Which is amazingly cool.
Now that I have proof of concept, I should figure out how to do it from someplace other than my computer desk chair…

Update: and so I have. While internet access with Splashtop is an iOS- only feaure right now, my desktop has a built-in vpn server and the tablet has a built-in client and my router supports a dynamic dns service. The lash-up requires the use of my phone's connection-sharing capability; and I suspect that 3G will be a tad slow. But ... it lives!
Posted by Ian Argent at 10:28 PM 2 comments:

Made it out to Union County Pistol Range today. Shot off 170 rounds of 9x19 from the Glock and approximately 75 rounds of .22lr from the Marlin. Called it a day when I started doing worse at 10 yds than I had been doing at 20.

First thing I noticed when I got home was that I had an empty case in my shirt pocket. The Glock throws brass with wild abandon all over the place, including my forehead and upper chest (I always wear a hat for this reason.) Good thing I wasn't passing through Massachusetts later, eh?

Of the roughly 15 or so targets I shot, you get to see 3. None of them are from the Marlin, whose iron sights I am completely unable to use with any degree of accuracy, though I do get a fair amount of precision. Some kind of optic is on my wishlist for that gun.

The first one was my warmup at 20 yards.

the second, I had about dialed it in.

The third I ascribe partially to luck - though I also shorted the magazine by one round. Nonetheless, there are at least 4 rounds through the ragged hole in the center, and likely a fifth unless I completely missed the target with one round. Now I just have to be able to do that consistently. 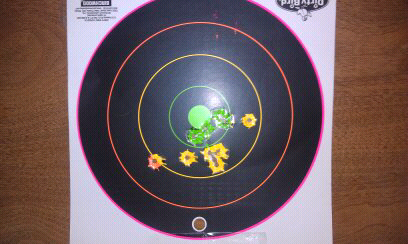 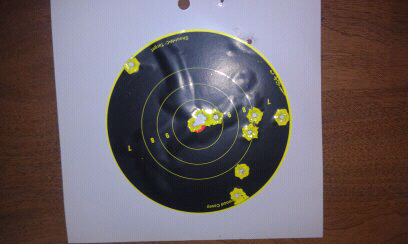 Email ThisBlogThis!Share to TwitterShare to FacebookShare to Pinterest
Labels: Gunplay, Me

This is a test to see if I can blog from my new tablet. It would appear so.
Posted by Ian Argent at 12:40 AM No comments:

Email ThisBlogThis!Share to TwitterShare to FacebookShare to Pinterest
Labels: Android, Blogging Recursion, Me

What’s the Net Present Value of a political promise?

Posted by Ian Argent at 8:38 PM No comments:

Looks like they’re planning to open in late June 2011

Email ThisBlogThis!Share to TwitterShare to FacebookShare to Pinterest
Labels: Gunplay, Other Places

If Dilbert suddenly starts appearing on cubicles, might I suggest a change in management style? (If it’s always been there, you’re probably OK)

Email ThisBlogThis!Share to TwitterShare to FacebookShare to Pinterest
Labels: Funny

Instapundit » Blog Archive » FACEBOOK CONSPIRACY THEORY OF THE WEEK: “What would you say if someone credible told you that Osama…

I would tell them to lay off the Clancy novels. Too many people involved to pull it off. All it takes is one enlisted sailor on the carrier to see the wrong thing and talk in the wrong bar; so it would never be authorized, and no one in the fields would do it on their own authority.
Good background for an airport novel, though

Another light goes out

Doug Chaffee: Passing of an Artist, of a Friend « Catalyst Game Labs
Battletech has been a part of my gaming life for almost as long as I have been gaming. Doug Chaffee has been responsible for the iconic imagery that was part of the reason I was drawn to the game. He will be missed.

If this image is an example of the thinking of Obama supporters, I am unimpressed.
I congratulate the President on giving the political go-ahead to launch this operation. Whatever else, he signed the buck slip when it hit his desk. But it is absurd to think that the decision to release the birth certificate was in any way affected by the necessity to give the go-ahead for an invasion of a sovereign nation that was giving aid, comfort, and sanctuary to a primary enemy of or nation. Comparing the weight of the two decisions is likewise absurd. The "birther" controversy was from the beginning and has always been a side-show.

Posted by Ian Argent at 8:21 AM No comments:

Practice for the apocalypse

Birchwood Casey has a bunch of zombie targets on display at the NRA Annual Meeting
The line is called Darkotic, and here's a press release on the subject.
http://www.theoutdoorwire.com/story/1303805931jgxafbtfy7r